What I “Think” The Movie is about

“A former police officer trying to enjoy his time away from the grind, is forced to go back to work to capture 4 human-like robots that the government created. 1 by 1 the robots, with shiny eyes and bad attitudes, meet their demise but not before killing those who stand in their way, proving once again, that no one wins when humans attempt to create life from scratch”

Where to begin on this movie review? I think a poem sung to the tune of “Folsom prison blues” is a good place to start (sing along in your head please).

“I hear the cars are hovering, they’re flying over men, and there hasn’t been sunshine, since I don’t know when, I’m stuck watching Blade Runner, and time keeps passing on. If this movie doesn’t end soon, someone shoot me with a gun.”

Ok, that was a bit dramatic, I know, but I’ve been trying to come up with a way to honestly and fairly review Blade Runner. After two days I still have nothing. I hated this movie. I knew we were headed for trouble when, even my husband wanted out after just 20 minutes.

It’s easy to say, “but Jennifer, it’s just not your type of movie, other people really enjoy this genre.” This sentiment doesn’t surprise me, I mean there has to be a reason this movie is on this list, right, or did AFI put a bunch of movies on a dartboard, close their eyes and throw?

If that’s the case, I noticed Steel Magnolias is missing from this list, I think a swap is in order.

So, what to do with a movie you paid 10$ for and never want to watch again? You post it for free on Craigslist (see listing here) and see if someone is crazy enough to want it.

Update: Posting has been up for 2 days, and while it was removed once by Craigslist (they must not be fans of this movie either,) some brave soul claimed it on LetGo!

Update 2: Brave soul who claimed movie stood me up during pick up. (sounds about right) Movie is still up for grabs. 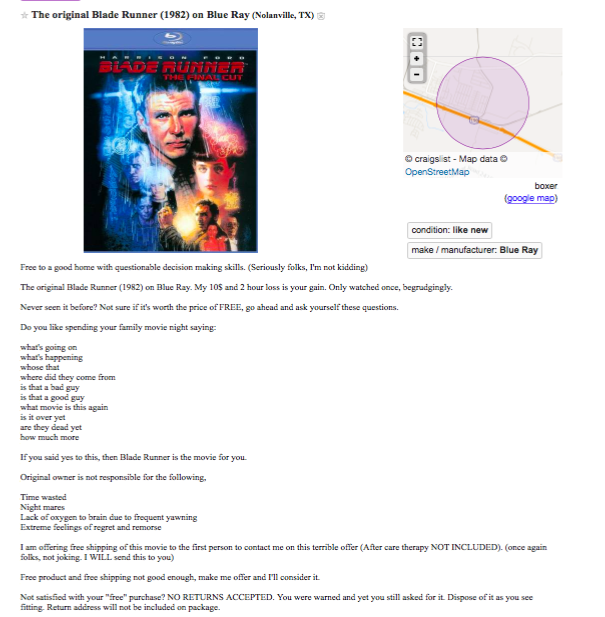 Are you a fan of Blade Runner (why?) and want to watch along with me? Click HERE to read my ‘live’ scene reactions while I watched this movie for the first time.

Also, are you looking for a serious review of this movie and the rest of movies on AFI’s greatest 100 list? Check out the The Confusing Middle and read his thoughts!

I am a Hoosier at heart who has moved to the heart of Texas with my husband Matthew, our cats Rowdy & Mosby and our dogs Lucy & Wrigley. Matthew is a Chief Flight instructor at a flight school in Austin and I care for my mother full time and write random thoughts and posts in between. I started writing this blog as a way to keep people back home updated on our lives here in Texas, and has turned into a way to relax, think and to make others laugh! View more posts