We had to shave our cat. There’s a sentence I never thought I’d have to type. Now before your mind wanders or you call PETA, we didn’t do this for fun or for sport. Mosby is fine, a little cold, but fine. He thought it would be cute to sit on a wax warmer. A wax warmer that is intentionally hidden for this reason.

How did Mosby become the latest attraction at Madame Tussauds you ask? We are 99% sure this is what happened.

It’s 4 A.M. and everyone is asleep. Suddenly Mosby hears a loud noise coming from the living room. Fearing for the lives of his family, he gets down from his perch to investigate. After running as fast as he can from one end of the house to the other (repeatedly), he finds himself being attacked by a large snake in the shape of a bread tie. Heroically Mosby tackled the bread tie snake, violently smashing and thrashing it around. After swiftly swatting at it with his paws he realized the battle was more than he could handle. In an effort to find safety he leapt 4 feet into the air, landing behind the TV directly on the wax warmer. Mosby, now coated in wax on his stomach and leg has found himself “safe” but the bread tie snake still remains at large. 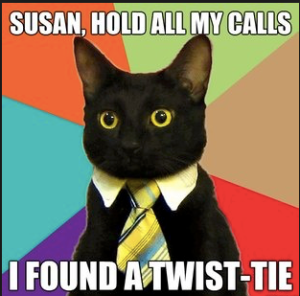 Before we get into the physics that goes in to shaving a cat, I want to assure you that we contacted our vet to make sure this wasn’t an emergency situation. Oddly enough, they’ve seen several cases of cat vs. wax warmer (spoiler alert: wax warmer always wins), and have found that even with sedation the removal process can just as “easily” be done at home. Basically, they were not interested in being clawed to death by a 24 lb. ball of fur, wax and anger. I don’t blame them. 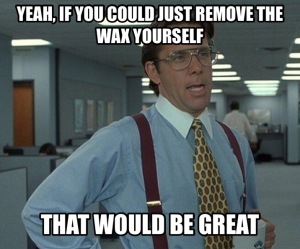 We were officially on our own. The most popular options presented to us were, dish soap, coconut oil, vegetable oil and finally shaving. Since neither of us have experience in pet grooming, (in fact I’m still trying to master shaving my legs without cutting myself) we opted for the soap and oil methods first.

We huddled in the bathroom (only one exit and no breakables) armed with towels, various oils and an angry cat. You know, your typical date night. Thinking there would be cat hair EVERYWHERE, I stripped down to my socks, underwear and sports bra. This would have been a great idea if Mosby was completely declawed, but I quickly and regrettably remembered his back feet (his strongest I might add) still have claws. Being nearly naked was no longer and advantage.

While distracting Mosby with a buffet of cat nip, we quickly lathered him up in enough oil that would make Paula Dean proud but even with a fine tooth comb the wax would not come loose. As we feared, shaving had become our last option. Mosby, slippery and high on catnip needed a break (as did we). We decided to stop for the night. We needed to lick our wounds, gather our thoughts and formulate a plan for the great cat shave of 2018.

We went in to day two with what we thought was a solid plan. We bought a corded mustache trimmer, (no time to mess with batteries) cat proof armor, (3 layered hoodies, gloves and blankets) and found a spray catnip that we hoped would distract him long enough to sheer him like a sheep. The plan was to get in, get out eat dinner watch an episode of The Nanny and never speak of this incident again. 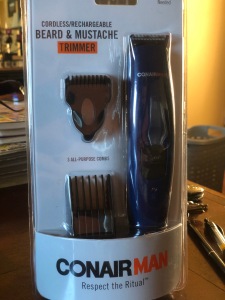 After performing what can only be described as an alligator death roll, Matthew and I were left with a pissed off, half shaved cat. We had 1 torn hoodie, a blanket that I swear is still missing and a pair of wax clogged mustache trimmers that will never work right again. Cat nip and fur were everywhere, our bathroom looked like a 4-h project gone wrong. 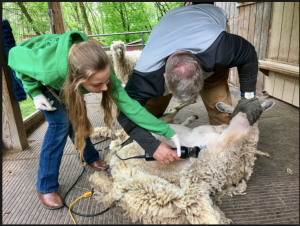 After yet another call to the vet it was decided that we would allow the stomach fur to grow out long enough to where it could be trimmed with scissors. Lord give me strength. Our only other instructions were to keep the area clean and to keep Mosby happy. Not included in the instructions were hiding all the belongings that Mosby may or may not plan to pee or throw up on out of spite.

I am a Hoosier at heart who has moved to the heart of Texas with my husband Matthew, our cats Rowdy & Mosby and our dogs Lucy & Wrigley. Matthew is a Chief Flight instructor at a flight school in Austin and I care for my mother full time and write random thoughts and posts in between. I started writing this blog as a way to keep people back home updated on our lives here in Texas, and has turned into a way to relax, think and to make others laugh! View more posts